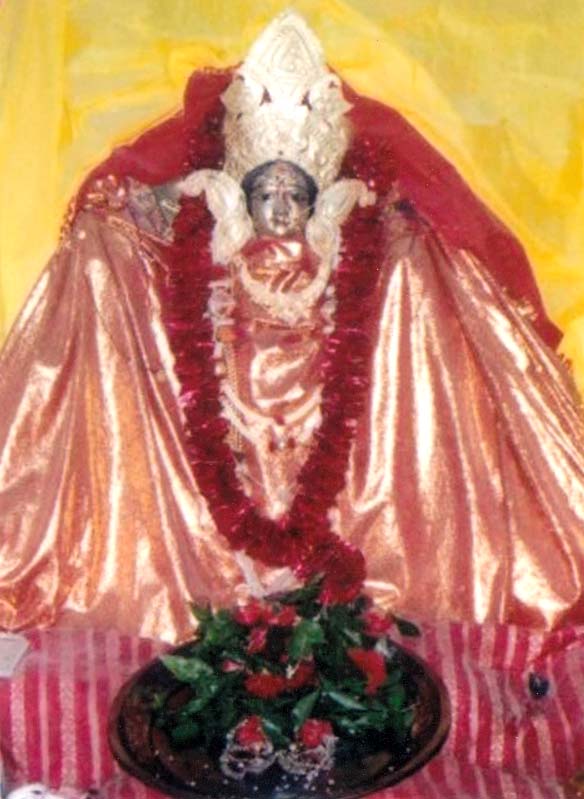 Aparna Devi temple is one among 51 Shakti peethas. It is located in Bhavnipur village, Bogra dist., Rajshahi division, Sherpur, Bangladesh. Although there is no record of temple age, people believe it to be very old and goddess here is called with different names like Aparna and Arpana.

During Daksha yagna, when goddess Sati self-immolated herself, cut her corpse by Lord Vishnu, her Left anklet (ornament) fell at this place.

Faith: Devotees believe that whoever dips in this pond and worships the goddess with wholehearted they will get rid of skin diseases.

There is a pond named Shakha-pukur, devotees treat it as holy as river Ganga. This temple is stretched over 4 acres surrounded by a boundary wall. The Bhabanipur Temple Renovation, Development, and Management Committee are supervising the property of the temple and its activities from 1991. Although there is no idol of goddess Aparna previously, the committee placed an idol of goddess Kali and proper rituals are being followed then.

There are stories heard here is that king of Natore and his grandsons meditated here. We find five skulls and yoga kunda there. Also, there is another story which says that the goddess appeared as a small girl to bangle seller near a pond in a dense forest. She had Tilak on her forehead with divine charm in her face. She bought a few bangles and said she is the daughter of Nator Rajbari and collect the money from her parents. When the dealer approached, Nator Rajbari was surprised and rushed to the pond where the girl appeared first. A later dealer suspected that she is a goddess and started worshipping her then goddess showed her hand from the pond wearing conch bangles. From then the pond is called with conch bangles pond, locally Shakha-Pukur. Devotees who come to visit deity first have a bath in this pond and visit the temple.

Road: Aparna Devi temple is located 28 km. from Sherpur or via Ghoga Bot-tola bus stop located on the highway. Also, there are many local vans floating towards the temple.

Air: Bogra airport which is 30 km. away from Sherpur and around 60 km to temple.