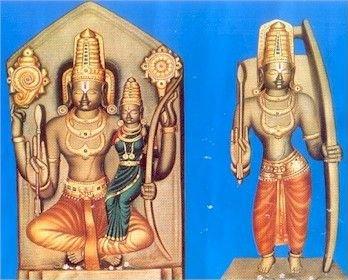 Bhadrachalam Sri Sita Ramachandra Swamy Temple is located in Khammam district of Andhra Pradesh, India. This temple is known for its grand celebration of the wedding anniversary of Lord Rama with Goddess Sita on the eve of Rama Navami.

Bhadrachalam temple was built by Kancharla Gopanna who is known as Bhakta Ramada during the second half of 17th century. According to Ramayana, Lord Rama, Sita, and Lakshman stayed at Parnasala. This temple was built using the money of government treasury without the notice of King. Gopanna was imprisoned at Golconda and punished for his work. Gopanna was a devotee of Lord Rama and worshipped him all the time. Pleased with his worship, Lord Rama appeared into the dream of Golconda King Tanishaand returned all the money spent for the construction of the temple. Ramadas is also known for his songs, he composed many Telugu songs in praise of Lord Rama.

According to the history, Badra Maharshi started praying intensively to obtain moksha, blessed with his prayer Lord Rama fulfilled his wish. Upon his name, this location was named as Bhadradri or Bhadrachalam. In the 17th century, a lord appeared in a dream to Pokala Dammakka who is a resident of that village and informed his existence as an idol on the Bhadragiri hills.

Two major traditional festivals being celebrated in Bhadrachalam every year they are Vykuntha Ekadasi and Sri Rama Navami. During this festive season, you find lakhs of devotees are being thronged from various parts of the country.

Places to be visited: 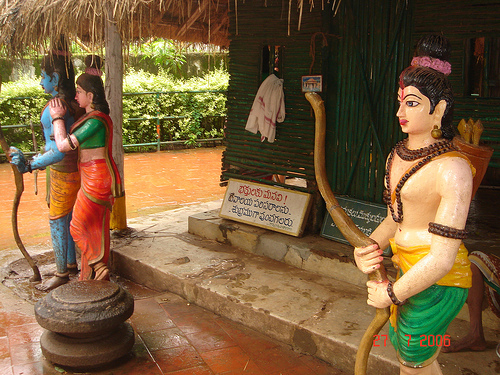 Parnasala: This is the place where Lord Rama build hermitage to spend his life during the period of vanavasa. There are pictures depicting the places where Goddess Sita bathed, turmeric and kumkum on stones. You can even find tracks of Ravana kidnapping Sita.

Jattayu Paka: Jattayu is a bird who is a devotee of Lord Rama. He tried to obstruct Ravana while he was proceeding to Lanka. After the combat, Ravana injured the bird and one of the wings was chopped. Then desperate Jattayu survived for a short period to inform the message who kidnapped and in which direction Ravana flew.

Dummugudam: Place, where Rama killed thousands of demons and the villages, is said to be built with the ashes of these demons.

Gundala: According to Brahma Purana, it is the place where Lord Brahma, Vishnu, and Shiva had a dip during the winter season. As a result, we can find hot water when we dig pits.

At last Ramagiri where we find Yogi Rama temple.

Bhadrachalam is well connected with all major cities of Andhra Pradesh.

Air:  You have the nearest airport at Vijayawada.

Rail:Kothagudam station about 40 km away.

Buses: You find state buses from all major parts of the state for every hour.