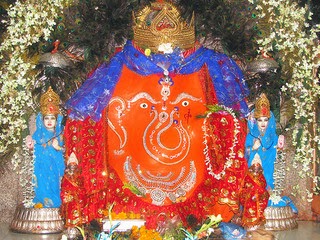 Ganesh Mandir located at Khajrana, Indore is one of the ancient temples in India. During the invasion of Aurangzeb 1735, he destroyed many Hindu temples, in order to safeguard the idol from his clutches devotees hidden the idol of the lord in the well. Later the temple was rebuilt by Rani Ahilyabai Holkar in the year 1875.

Rani Ahilyabai Holkar wanted to relocate the lord from the well and tried to build the temple in her palace, she tried a lot she even used elephants to relocate but all her efforts went in vain. This shows that without lords wish not even a stone can be pelted.

As time passed away the temple got developed from small hut to a huge temple. Khajrana Ganesh holds the largest Ganapathi statue in the world. Idol when measured from crown to foot, its 8 meters in length. You find Lord Ganesh along with his wife’s Siddhi and Riddhi along with his sons Subh and Labh and Goddess Saraswati.

It is believed that when a devotee prays lord with wholehearted all his wishes will be fulfilled. So you find this is crowded the devotees all time so the temple is taken over by Government. On Wednesday and Sunday devotees throng in huge to offer their prayers. Devotees regularly offer lord with precious jewels, diamonds and gold. The outer wall, upper wall, and gate of the garbahgriha are made with Silver. Eyes of the deity are made with precious diamonds.

With the grace of the lord, there is Nitya annadhan (free food) also there is free medical treatment. Apart from the Main deity, you find 32 temples around the temple.  The ambiance of the temple is soothing and peaceful.

Beliefs and Myths of Khajrana Ganesh:

Whoever devotee ties a sacred thread in the temple premise with devotion his wish will definitely be fulfilled by Lord Ganesh. Devotees who make swastika symbol with cow dung will be blessed very fast. Devotees say that temple premises are filled with positive energy and they can feel it once they enter the temple.

Places to visit near the temple:

Road: As this temple is very famous, you find many transport mediums once you tell the temple name.

Rail: Travel time from railway station to temple is 12 minutes around 2 km.

Air: Devi Ahilyabai Holkar National Airport is the nearest point which is around 15 km.