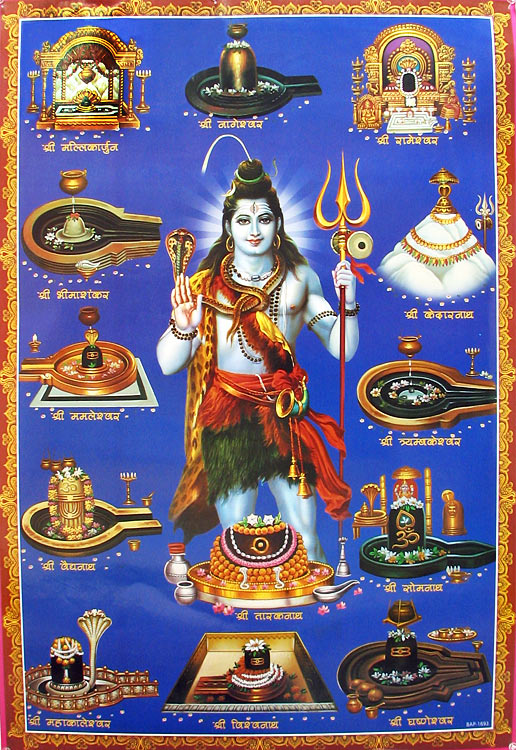 In Hindu Mythology Lord Shiva is considered to be the supreme god. He is called the destroyer, powerful, one among trinath (Brahma, Vishnu, Maheshwar) gods. People who worship Lord Shiva are called shaivas. He is worshiped in the aniconic form in local words lingam.

Puranas says he is immersed in deep meditation and lives in Mount Kailas. Some of them also say he is a great ‘yogi’. He shares a half body with his wife Goddess Parvathi. He has two sons named Lord Ganesha/ Vinayaka who is known as the god of all vignas and Lord Kartikeya/ Murgan/ Subramanya who is well known for Sarpa/ snake Shanti rites.

It is said he wears tiger skin and apply ashes to his body. He has blue throat as he drank poison during Samudra Manthan (churned the ocean with the help of mountain and snake by gods and demons). He is also said to have a crescent moon on the head and the sacred Ganges in his hair. He is called as “Bola Shankar” – his satisfies easily and gifts boons to all his devotees. Puranas says he is the only god prayed by demons as he gifts boons without any regard with future consequences. It is said because of his boons he was responsible for many complications and in some times he himself put in troubles. He is called as Nataraja for his cosmic dance with the help of damaru (a small drum shaped hourglass)

In order to bless his devotees, Lord Shiva has manifested himself as Jyothirlingas in many places. Many people say that there are 64 jyothirlingas out of which only 12 are considered as very auspicious.

10. Triambakam at the bank of Gautami River (Maharashtra)

11. Kedar (Kedarnath) in the Himalayas (Uttarakhand)

One who recites these Jyotirlingas stotram every morning and evening, he is relieved of all sins committed in past seven lives. One, who visits these temples, gets all his wishes fulfilled.