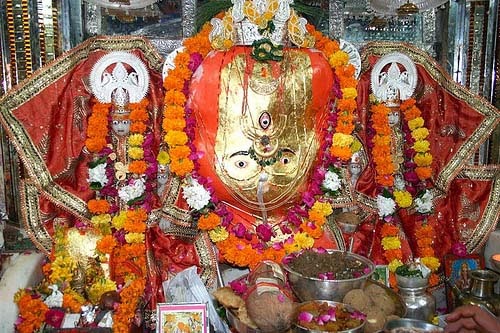 Ranthambore Ganesh temple is one of the ancient temples of India. It’s known for its architecture, beliefs, and myths. Based on the letters you get or pilgrims who throng to get blessings of lord or bravery of kings or any other reason, it’s very famous in whole Rajasthan.

In 1299 AD, there was a war between Alauddin Khilji and King Hammeer. In order to stock ample food, they filled required food and other items in the fort where the king resides. War lasted for several years, food stock levels got completed. King Hammeer was an ardent devotee of Lord Ganesh, once lord appeared in his dream and said by tomorrow morning all your problems will be eliminated. When the king woke up, he was surprised to hear what the Lord said happened true. As a miracle all the food stock levels were full and the king saw lord Ganesh having trinetra (three eyes) embossed from one of the fort’s wall. Then decided to build a temple by installing lords wife’s Riddhi Siddhi along with his son’s shub labh and mushak (lord’s vehicle).

Devotees strongly believe before starting any business or marriage, if we take blessings of the lord by putting their invitation or wedding card brings the goodness. Based on the belief lord receives around 10 kg of mails cards from all across India, as well as through the globe. The good part of temple authority is that all the cards are recycled and reused for Prasad.

During annual mela we observe around 1 million pilgrims visit the temple in just 3-4 days. All the routs get overcrowded and in some times pilgrims have to move on feet all over to the temple. During this period wildlife in tiger part adjacent to the fort gets disturbed. Locals also believe that offering food seeds to the lord and taking seeds thrown from the skillet will make their agriculture yield more. Few also say that by building a house with stone pelts will make their wish to build their own house without any obstacles.

Apart from other things, devotees also enjoy looking at fort’s architecture build with large stones and its climate surrounded with greenery everywhere. During the rainy season, its scenery is more beautiful.

Road: From Sawai Madhopur its 12 km.