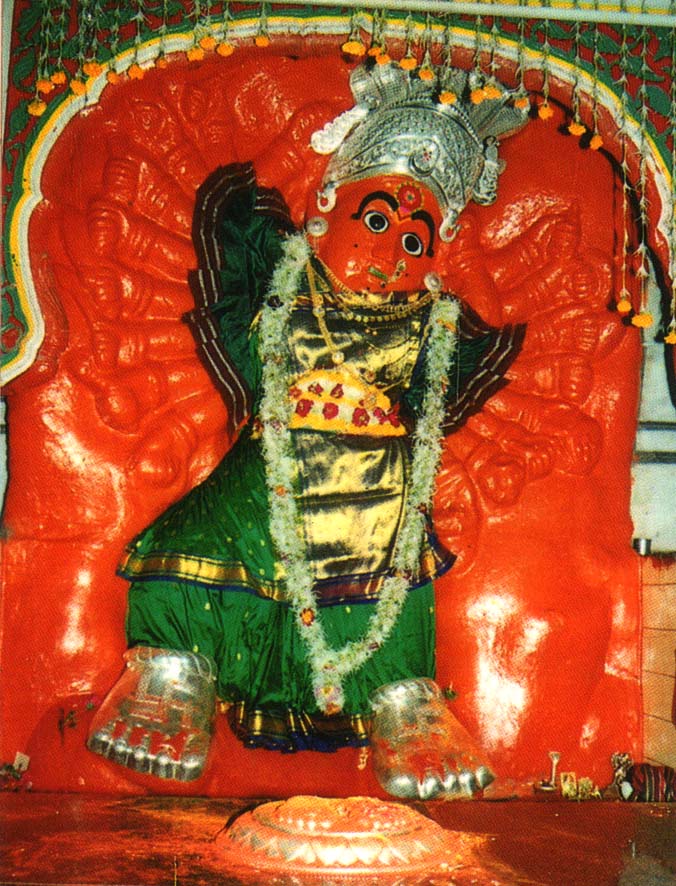 Saptashrungi  Badrakali Temple is one of the 51 Shakti Peethas located at Nasik, Maharashtra, India. Goddess is called with different names like Bhramari, Chibuka (the one with the chin) and Saptashrungi (Goddess who have seven arms) lord Bhairava associated with a goddess is called with the name Vikritaksh or Sarvasiddhish (lord to fulfill all desires). Goddess is said to be swayambhu (self-manifested) who is 10 feet tall with 18 hands holding weapons.

According to the mythology Daksha yagna and Sati self-immolation, it is the holy place where Sati Devi’s “Chin” fell down.

Devotees believe that Bhramari Devi is equivalent to million dark suns as she is surrounded by black bees. Also, it is believed that the sound produced by black bees sound like beej mantra “Hring”. Because of her brilliant dark nature, she is also called with Kalika or Badrakali who destroys egoistic demons.

There is another saying that goddess created thousands of black bees to kill a demon named Aruna who was blessed by Lord Brahma not to be killed by any living creature which has legs, wings, weapons, etc. ignoring bees. In another belief, the goddess is called as Mahishasur Mardini, the goddess who slew a demon named Mahishasur when he took the form of buffalo. Hence we can still find stone made buffalo head at the foot of the hill.

Goddess is always coated with sindhoor like Lord Hanuman which locals believe to be auspicious. She is dressed with precious ornaments made with a silver nose ring and gold items. As per ancient texts, Lord Rama along with goddess Sita came here to seek Bhramari Devi blessing.

Road: Badrakali Temple located in Vani village is 40 kms. away from Nasik city. Which is well connected with all kinds of transport facilities.

Air: Mumbai is the nearest airport which is 185 kms. from Nasik