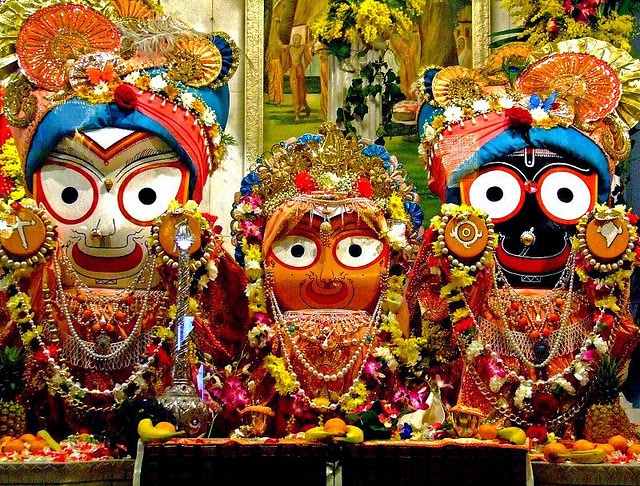 Sri Puri Jagannath temple is one of the famous and sacred temples belong to Lord Jagannath. It is a place where ancient rituals and cultures were followed. Here we find trinity gods in the form of Jagannath, balabhadra, goddess Subhadra and Sudharshan Chakra. The Jagannath temple was built in the 12th century A.D. by king Ananta Burman chodaganga dev.

As we are all are aware that India is a country were many kings ruled, here we find their presence and their style of worship even today. This temple is located in the city Puri on the branches of the river. Jagannath temple is not only known for its architecture but also for its natural beauty.

The above sloka is one of the ancient Sanskrit slokas which means, He is the lord of the universe, and he is immortal and remains a mystery. He is the supreme among mankind.

This temple is filled with many secrets and mysteries. Usually, we find idols made of metal or stone but here idols are made with wood (neem logs referred as Daru Brahma). For every 12 years, these idols are ceremoniously replaced by another wooden replica. Hindus treat this as a new embodiment but the exact reason behind this ritual still remains secret. Lord Jagannath is being noted in many ancient texts like Agni Puran, Brahma Purana, brahmana Puran, etc.

Devotes who come here have a holy bath and visit nearby shops to purchase items which are liked by the lord. Then enter into the main entrance where you find Dwajastambam. Whoever devotee sees dwajastambam of Puri Jagannath is considered to see lord directly. This temple is an amalgamation of different temples, here we find Lord Vishnu, Lord Shiva, and goddess Shakti.

We find the sacred mantra “Om namo jagannatha swamiye namaha” is being spelled by all devotees while entering the main temple, here we find 22 steps which we call as Bahise Sahocha.

Every year there will be Ratha yatra (Chariot festival) which is considered to be one of the biggest Ratha yatras in India. This is done during the 2nd day of Aashada masa, Sukla Paksha. During Ratha yatra, sacred idols are being bought from the temple and place them on their allotted ratha with the process of Pahundi by making idols move front and back.