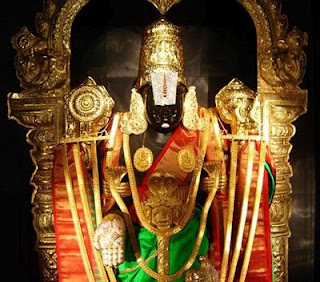 Tirumala Venkateswara Swamy is one of the richest temples in
India. It is located in Tirupati, Chittoor district of Andhra Pradesh. It is
located on the hill town of Tirumala which has seven peaks, each peak
designates individual Hindu gods known as Seshadri, Neeladri, Garudadri,
Anjanadri, Vrushabhadri, Narayanadri, and Venkatadri. Tirupati is also called
as Kaliyuga Vaikunta. It is one of the richest pilgrimage place, people from
all corners of the world visit. According to data, more than 100000 devotees
visit the temple.

With the act
of sage, Sri Mahalakshmi was anger on Lord Vishnu and left Vaikunta. Unable to
stay in lonely Vaikuntha, the lord came down to earth and was meditating without
food and sleep. Unable to his situation, Lord Brahma and Shiva took the form
of a cow and its calf to serve. The cow reached the cattle of Chola country. The
cow used to feed Lord Vishnu who was medicating by automatically pouring milk
into the ant hill wherein Lord Vishnu was meditating. Once it was seen that cow
was emptying its udder at the anthill, cowherd wanted to punish the cow,
however lord Vishnu rose from the anthill to save the cow.

One day Lord Srinivasa who went to the forest to hunt, he chased wild elephant. With the sight of elephant, princess
padmavati and her maids were afraid and started pelting stones. Injured srinivasa
reaced to vakula devi and narrated the whole story. Vakuladevi learned from the
maids of Padmavati Devi that even she was pinning for Srinivasa. Both Lord
Srinivasa and Padamavathi were ready to get married with acceptance of their
elders. In order to overcome marriage expenses, Lord Srinivasa sought a loan of 11,400,000
gold coins with Lord Kubera. Understanding the commitment of Lord Vishnu
towards Goddess Mahalakshmi, she chose to live in his heart forever.

In remembrance
of the act, devotees offer donation so that lord can payback whole money along
with interest to Lord Kubera. People also offer head tonsure, as when the Lord
Srinivas got hurt on his head, a small portion was bald. Unable to see such an
attractive face having a mark, Princess Neela Devi offered some of her hair and
covered the part.


Along
with temples, there are many magnificent nature rich places to visit like Akasa
ganga, Kalipaka thirtham, etc..