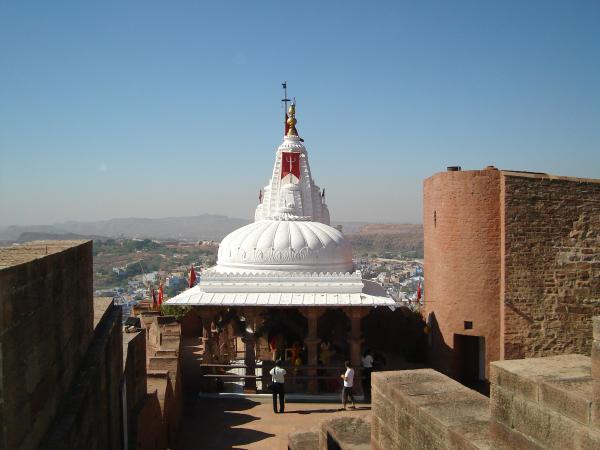 Manibandh Shakti Peeth or Chamunda temple, at Gayatri hills in Pushkar (near ajmir) is one of the 51 Shakti peethas in Rajasthan. This temple is considered as one of the ancient temples belonging to Treta Yuga (based on the idols available). We find two statues of Lord Ganesh and goddess Kali towards extreme corners (left and right), these idols are said to belong to the age of Treta Yuga.

According to the mythology Daksha yagna and Sati self-immolation, it is the holy place where “Wrists” fell down. Bhairava form of Lord Shiva is worshiped with the name Sarvanand.

Devotees believe this temple is the ideal place to do Gayatri Mantra sadhana and goddess is believed to relieve devotees from domestic issues and fulfill their wishes.

Pushkar is a place near the lake Pushkar which is associated with Brahma Puran which says this place is linked with the creation of the universe. We find many Hindu temples nearby, it is said that many temples were destroyed during Muslim invasion.

One of the famous temples nearby is Brahma temple and is believed to be built during the 14th century. According to Ancient texts, there are no temples to Lord Brahma, so this temple belongs to one among rare temples of Lord Brahma.

Places to visit near Pushkar:

Road: Pushkar is well connected, it is about 5-6 kms. from Pushkar Brahma temple. One can easily travel to the temple by catching local auto or taxi.

Rail: The nearest railway station is at Ajmer which is about 15-16 kms.

Air: Although it is not near to the temple one can drop at Pushkar, Jaipur which is about 135 kms. away from the temple.

Note: It is preferred to visit during day time as its out of the city.