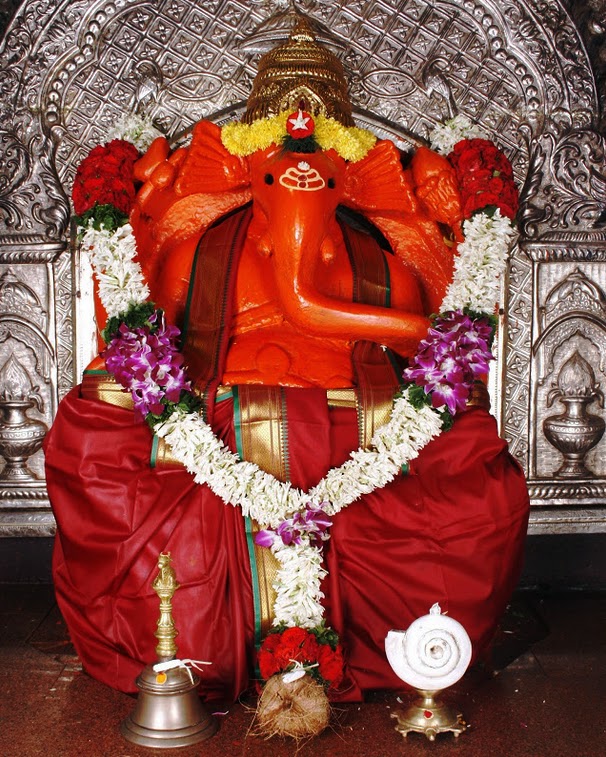 Siddhivinayak temple located in titwala, Mumbai, Maharashtra, India is one of the ancient Hindu temples. Siddhivinayak temple boasts from the period of Mahabharata, with magnificent architecture style. This temple is popularly known as “Titwala Ganesh” and is flooded with devotees on Tuesdays and Chaturthis.

Lord Vinayaka is considered to eliminate all kinds of obstacles and he is considered to be worshiped first before starting any task. Here in this temple devotees believe if separated couples pray lord with devotion then they will get united and Marriage desires of bachelors will be fulfilled.

Ganesh Gayatri Mantra to be chanted:

Once King Dushyanta passing from the forest with his battle campaign fell in love with Shakuntala (adopted daughter of Sage Kanva). They both got married according to Gandharva rite. Due to unrest in his kingdom Gandhara, Dushyanta has to leave. Before leaving he gave a ring which is believed to be royal signet and promised to return back.

While Shakuntala was dreaming about her husband she forgot to pay attention to Sage Durvasa (who is known for his short temper), in return sage cursed her that her husband will forget her and will not return back. After accepting her apologies he toned his curse and said Dushyanta will recognize her once she shows token of love. Meanwhile, Shakuntala’s father sage Kanva established idol of Siddhi Vinayak and said to build a shrine and worship with devotion. Lord will bless you and join her husband. In the later period, she not only got united with her husband but also gave birth to a child who is well known as Bharath.

As Shakuntala built this temple during the period of Mahabharata, we can find samples of ancient architecture. During the rule of Peshwa Madhav Rao, this temple was found while the de-silting operation of the water tank. He found the idol of Lord Ganesh and started renovation work with stones. Initially, the temple was built with wood and was very small, later Peshwas donated land to make it big. After additional land donation by Joshis (hereditary priest of temple), the current temple comprises of 3-5 acres of land. We find idol eye decorated with ruby stones. Temple pinnacle is sculptured with Ashtavinakas and we have Shiva temple in the form of Linga on the right-hand side of the main entrance.

vrat will be completed without any obstacles and blessed with desired boons.

Temple will be opened by 5 AM. At 5.15 AM Panchamrut Abisehk and by 5.45 AM Aarathi will be performed. Then after until 1 PM it is allocated to visiting time. Again by 2 PM doors are opened until 9PM.

On Sankashtahari Chaturthi, doors are open from 4 AM to 11 PM.

On Angarki Sankashtahari Chaturthi, doors are open from Monday night 12 to Tuesday night 12.

Air: It is 75 KM from Mumbai International airport.

Rail: We have Titwala station which is the third station from Kalyan. You have many trains via Kalyan

Road: As this is one of the famous temples in Mumbai, it is well connected with buses and other transport mediums. From Titwala it is approximately 10 minutes journey.